A perfect, unflawed system in any business sector is virtually unachievable, and the biotechnology and therapeutics industries are no exception. Although we are innovating and making strides to end what were once thought of as incurable diseases, we still do not have one single agreed upon way of funding the research and development of drugs and medical devices.

Week after week, new devices and drugs are approved by the FDA, but where does all the money that funds these life science investments come from? Part of it comes from government grants through the National Institute of Health. More specifically, $32.3 billion annually is awarded through nearly 50,000 grants reaching over 300,000 scientists throughout the country. The rest of the estimated $117 billion comes from industry, foundations and other private sectors. And although $117 billion sounds like a lot of money, it only accounts for 0.7 percent of the gross domestic product while the healthcare industry provides 17 percent of the nation’s economy.

A recent U.K. government review stated that the future of research and development funding should be done through the government itself. With a backing from former Goldman Sachs chief economist Jim O’Neill, not only did the research say that it should be funded this way, but that those who don’t participate should be fined. Although this may seem like a good idea, there are many reasons why our current system benefits both private and government industries.

A government funded only system sounds like a good idea, but in reality it may take away the drive that pushes many to support the industries. If all of the industry’s money was distributed this way, research studies that may have not gotten a significant amount of money to use would then be awarded funds. Although this may seem like a win-win situation, it would create a much less competitive industry. You would no longer need to be the best, most precise researcher possible, because quite frankly you’d never be given a deserved reward for the service provided.

On the other hand, a system regulated only by private funding would be equally detrimental. One good thing that it would create is competitiveness. The best and the brightest would be rewarded for their work, but would they strive to help the next generation like they do now? It would create an industry run by the wealthiest, only trying to help them get richer and solve only their problems. Poverty in our world has already been one of the leading factors of the spread of disease, and if the research and development went private, this issue would only grow substantially. Each newly developed life science products could become a monopoly, similar to what happened when Martin Shkreli, former CEO of Turing Pharmaceutical, hiked up prices on his company’s drug, Daraprim, an antiparasitic commonly used to treat HIV patients. The government side of the industry is what keeps the private in check, just as congress is designed to do for the president.

The key to addressing the seemingly intractable diseases of our time is to strike the appropriate balance between public and private financing.

For Government, there is simply too much focus on academic science and not enough on small business, one of the major engines of innovation in the drug and device sector.  For example, only a very small fraction of the total NIH funding goes to small businesses through SBIRs, STTRs, UO1s and RO1s.

From the private investment side, while angel investors have stepped up to the plate to fund innovation, venture and strategics have moved away from the risk and created huge funding gaps that, in the end, only hurt them in the long term through a complete loss of innovation in the pipeline.

So how do government and private funders pivot to drive research and development forward? Government funding needs to expand their effort towards funding the science beyond the bench. The private sector funding also needs to modify their investment models to allow for the risk in investing to the research. If both sides are able to support the translational process on the road to commercialization than more funds will become available to life sciences companies thus incentivizing them to research and develop life saving solutions to the public. 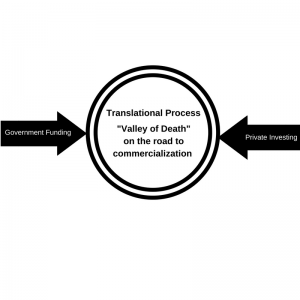